Leeds ArtForms city-wide youth steelband, the Leeds Silver Steel Sparrows, is eighteen years old. The Sparrows hatched out in in 2000, making them as old as the century. They nested at City of Leeds School for nearly all of that time, as many of the pan-playing students from Royal Park, Little London, Hillcrest, Leopold, and other primary schools in Hyde Park, Little London, Chapeltown and Harehills went there as their high school.

The younger players this year come from Roundhay, Allerton Grange, Leeds Grammar, Royds and Gateways, the older ones are at university or college. Early on in their pan careers students learn to read the Foxwood Songsheets (a deliberately imprecise system of notation), so that the older ones can sight read at gigs, if necessary, or just attend a couple of practices. So just as the older ones carried the Littlies when they were just beginners, now the younger, but established players can repay the debt, and carry the older ones.

Traditionally steel bands used to learn by the aural/visual method, and while this gives you a great freedom when it comes to performing, it can put off some would-be players. Most community bands makes notes, or even use formal notation. The Foxwood Songsheets were originally designed to allow the greatest freedom of improvisation. They give the least amount of directions, information is pared down to a minimum, and this benefits anyone with additional needs, eg dyslexia, autism etc. Once a song is learnt players may find that they can play it from memory, but there no pressure to do so, nor any to keep using the Songsheets, either. 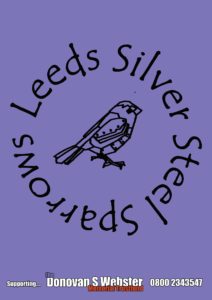 Our repertoire consists of songs from all genres, from calypso, soca, jazz to reggae, pop and classical, from songs players know and love to those they initially baulk at. However it our philosophy to introduce new pieces of music to them and expand their musical knowledge. Plus we invite players to contribute the arrangements. At Music For Youth this we played Some Enchanted Evening, California Girls and Living on a Prayer. Other songs in our present repertoire include Mozart’s Symphony Number 40, Jess Glynne’s Hold My Hand and Prince Buster’s Wings of a Dove.

The Sparrows practise once a week during term time. In any given year, they play most of the gigs around Christmas and again during the summer months. For the big prestigious concerts, they occasionally team up with sister bands, Foxwood and East Steel. They did this in 2014 for the Grand Depart, from the first Tour de Yorkshire, when we collected twenty-five players to perform outside the Leeds Arena.

Steelpans are both heavy and delicate and awkward to transport, so twenty-five-piece orchestras are the exception! Generally we play as an eight or nine piece, and because everyone has other things in their life (such as the cricket team) we all, over time, learn more than one pan. This is also where being able to sight read the Foxwood song sheets is also important.

Sparrows are expected to put in time with the low-profile, less prestigious gigs (eg schools’ summer fairs) before hitting the dizzy heights of the Town Hall. But, when they are ready we accept the big gigs. Leeds Town Hall for Leeds ArtForms Prom is a favourite as students get to play in front of nearly a thousand Leeds school children, often including from their own primary schools. Plus this year we had the extreme pleasure of playing Elton John’s Rocket Man along with the Leeds Youth Orchestra.

We also occasionally travel further afield if the event is right, and, over the eighteen years have played many times at the Birmingham Conservatoire for the National Festival of Youth, once each at the Royal Albert Hall, the Festival Hall, and St Paul’s Cathedral , al in London. But while the rewards are great, so is the effort to travel these distances, so generally we try to stick to Leeds and nearby cities.